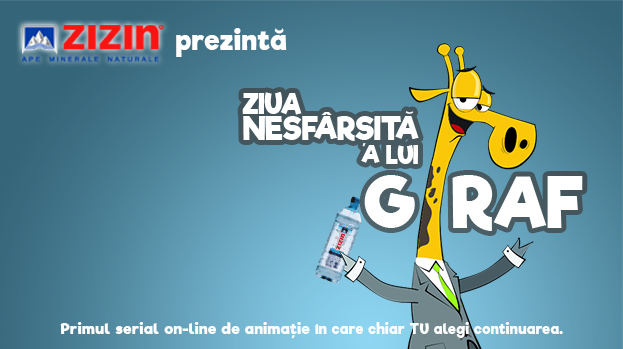 There is no day longer than Monday in the entire week! Especially when you start your morning badly, the misfortune follows you all day and the office hours seem to go on forever. In such a day we meet Giraf, the new character created by MullenLowe for ZIZIN, and his story, one in which we all find ourselves, has an open end.

The never ending day of Giraf is an animated reactive mini-series in which Facebook users can decide the sequel of each episode.

„After the succes of our previous campaigns’ stories, we wanted to give birth to new happenings and characters to engage consumers in the online conversation. With the help of MullenLowe, we introduce to our Facebook fans the lovey Giraf, a character whose Monday they can change with a simple… reaction,” says Mihai Pârvulescu, Marketing Specialist, ZIZIN.

Thus, at the end of each episode, the fans are invited to vote with reactions – love, sad, haha, angry, wow. The predominant reaction will determine the rest of story.

”We aimed to create video content with which consumers can interact in social media, so we completed the universe of ZIZIN stories with new characters with which we identify ourselves or which we often face. Thus, The never ending day of Giraf is an allegory of daily life. If Facebook had a peace button as well, every unpleasant situation would be solved more quickly and easily J,” adds Raul Gheba, Copywriter, MullenLowe.